Mobile devices are all around us and more  and more people ask if GanttProject runs on iOS and Android tablets. It doesn't, but there is a couple of third-party Android apps which can read GanttProject files. I installed them on my tablet and gave them a test drive.

GanttMan is developed by Martin Doudera from Brno, Czech Republic. 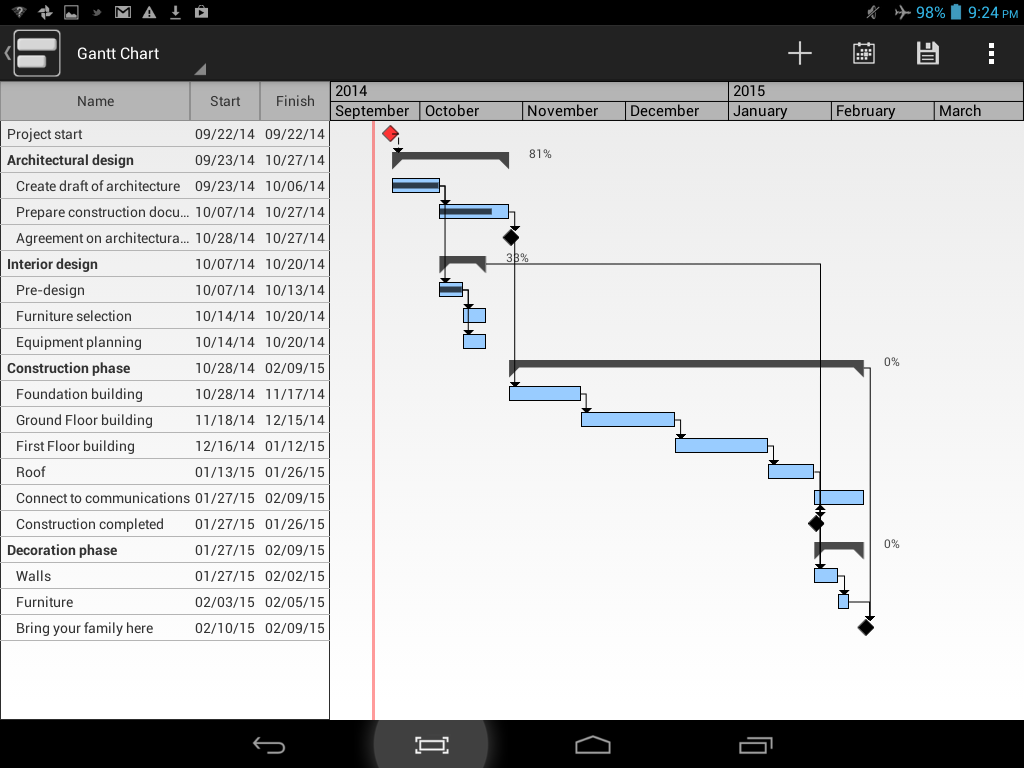 Gantt and Resource charts look very close to original GanttProject charts. There is not too much interaction on the charts: you can only scroll, pinch zoom or select a task with a long tap. The remaining user interface also resembles GanttProject and is quite intuitive and simple.


GanttMan doesn't support all GanttProject features: you can't see baselines or custom columns, can't export project to PDF or image.  However, it adds some features which are missing in GanttProject. Rescheduling of overdue tasks is one of them. You can find all tasks which are not yet done by the moment and ask GanttMan to either mark them as completed or extend them to finish on the current date. Optionally overdue tasks can be shown on project open, which might serve as a handy todo reminder.

Sample project file which comes with GanttProject opens in GanttMan without any problems. I tried to stress-test GanttMan and opened a big real-world project consisting of some 350 tasks and it worked pretty smooth.

Besides traditional file transfer through SD card, there is a little bit hidden option to send projects to Dropbox, Google Drive, email or other destinations included into Android's standard "Share" feature. Please be aware that  unsupported bits of information in the project file may be destroyed on saving, so if you have a custom column in your project, open file in GanttMan add a new task and save file then the custom column is lost. Martin plans to fix it, though.


GanttMan is freemium and (surprise!) doesn't show any ads. Pro version costs about 3 bucks and adds task filters and a few other features, such as multiselection.

GanttDroid is developed by Spanish guys from Rato WRS and can also read GanttProject files.

GanttDroid user interface  resembles GanttProject too but it has more custom look. Its Gantt chart is interactive, and it is possible to change task dates and draw dependencies directly on the chart, which is really nice. However, overall impression is that interface is a little bit cluttered and unsteady.


GanttDroid also provides a list of overdue tasks with the only option to mark them as completed. It can also export chart to raster image.

GanttDroid can read and write files to SD card and Dropbox/Google Drive (in paid versions). Unlike GanttMan, it seems to preserve unsupported bits, so working on the same file from desktop GanttProject and GanttDroid sounds possible.

For stress-testing I opened the same big project and overall GanttDroid worked good, although it started freezing for a couple of seconds on scrolling (especially vertical one) and tree nodes expansion.

GanttDroid is also freemium. Lite version is free and shows ads which I personally find quite annoying. Pro version (priced at ~$10) and Extended (~$15) add a number of interesting features, such as Dropbox and Google Drive integration and project and task templates.

Both apps look interesting; I liked GanttMan more because of its simple and clean user interface, but GanttDroid is more feature rich and features may overweight its UI quirks. I hope that they both will develop further to provide excellent user experience and will be great companions to desktop GanttProject.

Posted by Dmitry Barashev at 12:00 PM