Starting from GP 2.0.9, we host the source code of 2.0.X branch in Subversion repository on Google Code project hosting. Development instructions have been updated correspondingly.

GanttProject 2.1 will remain in CVS on SourceForge for a while, but the plan is to migrate it eventually to Google Code.

We're also moving bug tracking to Google Code, but this process is in the very beginning. Feel free to use our bug and feature trackers on SourceForge until the migration is completed.

GanttProject 2.0.9 distributions are available for download from Google Code, as well as from SourceForge
Posted by Unknown at 8:07 PM

Email ThisBlogThis!Share to TwitterShare to FacebookShare to Pinterest
Labels: development

Gantta Claus is here with GanttProject 2.0.9!

GanttProject 2.0.9 is available for downloading. In this maintenance release: 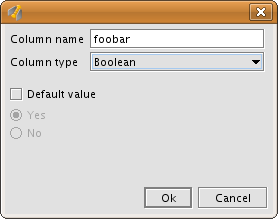 Merry Christmas and Happy New Year, and have fun with good software, no matter  whether it is free or not (gurus say that free is better :)
Posted by Unknown at 2:02 AM

The third milestone build of GanttProject 2.1 "Loire" is ready.

You're welcome to download it, try the new features and give us your feedback. What dashboards you'd like to have? Do you know some better way of arranging controls at the tabs of task properties dialog? Can you suggest a killer improvement for the new navigation panel? Your opinions are highly appreciated.

Please note that M3 is still far from being even alpha-quality software. It is unstable and many features don't work or just missing (in particular, export to HTML/PDF and printing). There are a lot of annoying bugs. We don't really need detailed bug reports yet, we want to hear just your overall impression and suggestions. Have I said that using M3 in production is strongly discouraged?
Posted by Unknown at 3:43 AM

A few months ago Joanna Muras from Ireland started working on GanttProject, and her work resulted into the most significant feature of the third milestone: task dashboards.

Routine operations are bothering. We don't want to search manually for overdue tasks in a big project or to separate high priority tasks from low priority ones. We do want software to do it for us.

Now there are Dashboards in GanttProject. They sit in the top right corner and do the routine job

Currently there are three dashboards. Priority dashboard just groups tasks by priority. Today's agenda shows you only those tasks which are supposed to be completed today. Overdue tasks looks for tasks which were supposed to be finished in the past but have not been marked as "completed". Besides, it also shows tasks with end date today, tomorrow and in the near future (you may setup the look-ahead days count in the dashboard settings).

Every dashboard lets you open task properties directly from the dashboard window, but some of them provide even more convenient ways of fixing the most typical operations. When you see some task which is overdue just because you forgot to set its completion percentage to 100%, you'll probably want to complete it. Dashboard can do it with just two clicks. Tasks which are marked with a light bulb have auto fixes, which appear in the context menu. You can mark overdue tasks as completed or reschedule to tomorrow a task which is due today.
Posted by Unknown at 7:27 PM

GanttProject 2.0.8 is here. Platform-independent distribution and Windows installer are ready, other distros will follow soon. 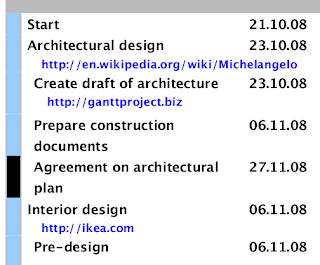 If you use weblink field for attaching documents from your local disk, you will also like that it now accepts relative paths.
GanttProject 2.0.8 also includes a few bugfixes. Find the complete list in the official release notes
Posted by Unknown at 3:35 AM

Task properties dialog keeps changing. We discarded our home-grown bogus system of collapsable and hideable panes that had appeared in M2 and implemented it on top of Flexdock library. It works fine, and now you have some freedom in task properties layout. For instance, it is easy to arrange them like this: Just drag any tab and drop it where you want it to be. While dragging, flexdock outlines possible drop targets, and creating necessary layout is really easy.

And yes, task dependencies panel is back. It looks similar to resources panel and autocompletion also works: The third milestone build of the next major release GanttProject "Loire" is coming soon, and I am going to shed some light in this blog on a few new features from this milestone.

The first feature is a new look of timeline and new navigation controls. The timeline is less cluttered with lines and in its upper part there is just enough space for a group of buttons which control zooming and scrolling.

Zoom in and zoom out do what they say. "Start" and "End" will scroll the chart so that a project start date or end date will become visible. "Today" scrolls the chart so that your current time is shown. The most interesting button is "Scroll". It show a popup pane with a small overview of the whole project timeline and highlighted currently visible portion. Well, that's not really new feature, you might have seen it in M2. But now it supports keyboard navigation. Using arrow keys you can scroll the chart to the left and to the right smoothly, with Page Up and Page Down you can do bigger jumps, you can even zoom in and out using Ctrl+ and Ctrl- keystrokes. And you can just click in any point of the overview pane and scroll the chart directly to that date. A tooltip will show you the date under the mouse pointer.
Posted by Unknown at 8:07 PM

DMG bundle for MacOSX is ready. Download it from our SourceForge download area.
Posted by Unknown at 2:05 AM

WebStart demo is available from ganttproject.biz
Posted by Unknown at 2:54 AM

GanttProject 2.0.7 is available for downloading. Platform-independent ZIP archive and installer for Windows are ready, MacOSX and Linux packages will follow soon.

The major improvement in GanttProject 2.0.7 is resource chart performance. It is an order of magnitude faster, and now working with complex projects with many resources and assignments will be much easier.

There is also a dozen of less important bugfixes. See the complete release notes here:

The Release Candidate build of GanttProject 2.0.7

Although this blog has been silent for a while, we didn't stop working on GanttProject! The next maintenance release is coming and the Release Candidate build is available for downloading at our SourceForge pages. The major improvement is performance of the resource load chart. Now it renders fast and scrolls smoothly with much more serious numbers of resources and assignments. There is also a number of bugfixes, the full list of them will be compiled and published later (they are all marked with group "scheduled for 2.0.7" in our bug tracker
Posted by Unknown at 3:28 AM

On January 29, 2003, Alexandre Thomas created GanttProject on SourceForge portal. Today is the 5th anniversary. I'd like to thank everyone who has been involved in GanttProject development and community for these 5 years. We hope that you love to use our product as much as we love to write it!
Posted by Unknown at 6:21 PM

Thanks to Nguyen Thanh Trung who submitted Vietnamese translation for GanttProject 2.0.x!
Posted by Unknown at 3:42 AM