We launched a renewed support forum on https://help.ganttproject.biz

Our old home-grown organic forum.ganttproject.biz have been working fine for years requiring almost no maintenance, but time flies and modern forum software provides nice features which had no chances to appear on forum.ganttproject.biz. So, we're running now our own instance of great open-source forum Discourse and it is our default go-to place for support.

Old forum will remain alive for quite a while. It is even in read-write mode now, however it will go read-only soon. 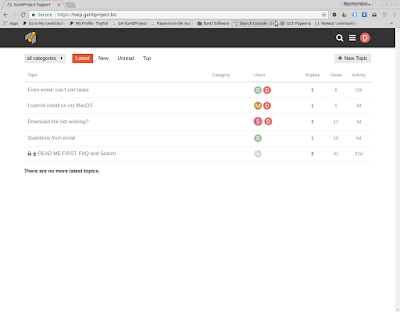 Posted by Dmitry Barashev at 2:56 PM

Email ThisBlogThis!Share to TwitterShare to FacebookShare to Pinterest
Labels: ganttproject.biz

We released GanttProject 2.8.4 which greatly improves UI scalability on high-density devices such as MacBook with Retina screen and Windows Surface Pro.

DPI option in GanttProject settings is now considered in the most major aspects of the user interface, including toolbar buttons and milestones and arrow shapes on the chart. This means that the whole application can be scaled by a simple change of DPI value in the settings.

The absolute majority of the users should be happy with the default value of 96. Those who use high-density displays are advised to set the value to something close to the real DPI of their screens. Values in the range 150-220 shall be good.

We recommend to set Normal size of Application and Base chart fonts and adjust them only for fine tuning. Bigger DPI value and smaller application font size may produce good results in some use cases.

In unfortunate case when fonts appear so small that it is hard even to change the DPI value, one can edit the settings file manually. The settings file is named .ganttproject (note the leading dot, such files may be hidden by the operating system) and it sits in the user home folder. It is a text file which can be edited in any text editor. Adding this line between any other option tags will set DPI to 120:

You need to close all GanttProject windows before editing the settings file.

Besides the scalability, GanttProject 2.8.4 fixes a few bugs and gets back iCal import plugin.

Email ThisBlogThis!Share to TwitterShare to FacebookShare to Pinterest
Labels: 2.8, Pilsen

While we do our best to import MS Project files as is, you may notice that after import some of the tasks change their dates. The reason is that Microsoft Project and GanttProject are different applications with different features and different behavior. If you see a warning saying that some of the tasks changed their dates, you may use the list below as a guide to fixing this issue. We recommend to start from the earliest task because it might turn out the cause of changes in the whole subsequent chain.

So, why a task may change the dates after import:

You may also find useful our docs on the scheduling algorithm in GanttProject.
Posted by Dmitry Barashev at 5:24 PM

GanttProject 2.8.3: how to get back ical import

Update: this bug is fixed in GanttProject 2.8.4


On Mac OSX the file sits in /Applications/GanttProject.app/Contents/Java/plugins-2.8.3/biz.ganttproject.impex.ical/ provided that GanttProject is installed in Applications

Sorry for this issue! We'll fix the distributions in the next update.
Posted by Dmitry Barashev at 3:44 PM

Email ThisBlogThis!Share to TwitterShare to FacebookShare to Pinterest
Labels: 2.8, Pilsen

We just've published a new maintenance update. This should solve annoying misaligned rows problem and a number of other severe issues.

Also, there is a new option for setting screen DPI density. The default value of 96 should be fine for most of the users, however, those who are suffering from tiny fonts on their shiny high-density screens may want to set the appropriate value (200-400), restart GanttProject and get fonts scaled. At the moment this option affects only fonts, not icons or chart graphics, sorry.